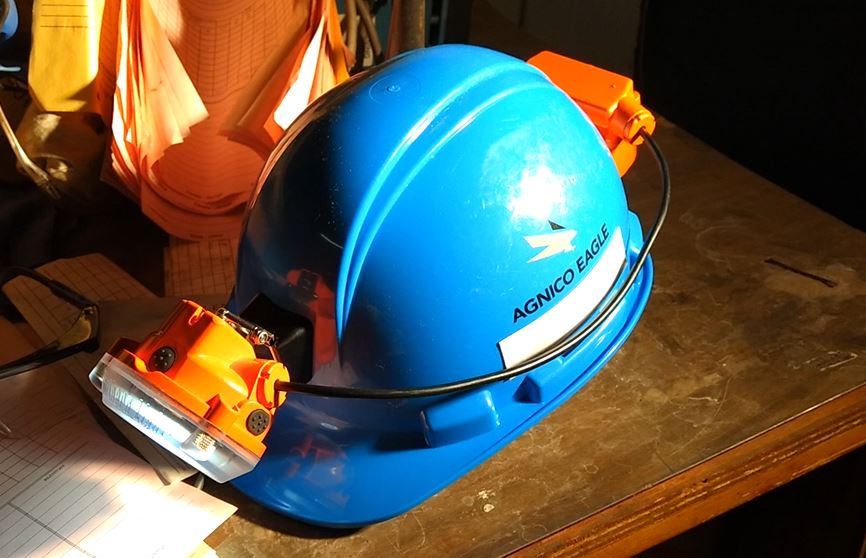 Application: A semi-corded cap lamp that could support collision avoidance and personnel tracking

Site Information:
Agnico Eagle is a Canadian senior gold mining company with operations in Canada, Finland and Mexico. They have exploration activities in each of these countries as well as the United States and Sweden. The company uses its three pillars – performance, pipeline and people – to form the basis of its business strategy while operating in a safe and socially/environmentally responsible manner. LaRonde, Goldex and Meliadine are Agnico Eagle’s three underground mines in Canada. These mines together produced approximately 735,000 ounces of gold in 2019. Agnico Eagle continues to view investing in the safety, security and productivity of its personnel through technology as a sound strategy to maintain their success in the future.

Project Details:
Agnico Eagle wanted a new cap lamp for its underground mines. They were satisfied with the helmet-mounted, all-in-one form factor of the Northern Light® Polaris and wanted to use this brand of cap lamp to enable their IoT efforts. The cap lamp would need to power and house a third-party collision avoidance and personnel tracking solution while keeping with the same or better light output of the Polaris. Agnico Eagle was willing to work with a cap lamp manufacturer and invest in the product development of an all-new IoT-enabled cap lamp.

Solution:
After working extensively with Agnico Eagle, and several of its third-party technology partners, NLT delivered the Northern Light® Eagle Integrated Lamp System (ILS). The Eagle ILS is an IP67, Proximity Warning-ready and Wi-Fi tag-enabled semi-corded cap lamp with best-in-class LED and lithium-ion battery technology. The Eagle ILS has a three-button headpiece connected via a lamp cord to a high-powered battery pack that is mounted on the back of the hard hat. The NLT charging infrastructure at Agnico Eagle’s underground mine sites was also retrofitted to accommodate the new Eagle ILS.

Capturing the Voice of the Customer:
This was the first time that NLT worked with a mine as the initial client, providing an unprecedented opportunity to listen to the voice of the customer. From concept design to manufacturing to deployment, NLT worked with Agnico Eagle to deliver an ILS that met the end-user’s needs. After NLT had won the contract with Agnico Eagle, they began to work closely with Agnico’s key personnel to develop a concept design for a helmet-mounted cap lamp. The design transitioned from an initial all-in-one cap lamp to a helmet-mounted semi-corded design to accommodate the two IoT technology tags. As the design progressed, comfort, function, integration and serviceability were all considered.

The mine’s personnel would be working for 12 hours with this lamp on their head, so the comfort of the end-user would need to be taken into account. The weight distribution of the lamp and how it balanced were tested extensively to avoid neck strain. The three-button solution was a functional design change to accommodate the third-party IoT tag company’s self-initiated emergency alarm solution. Finally, to enhance the serviceability, NLT made a choice to “stack” the LED board and Collison Avoidance tags onto one another. This design strategy would ensure that the future iterations of the lamp would be third-party agnostic and allow NLT to work with other technology providers.

NLT worked extensively with Agnico Eagle’s third-party partners to deliver the Northern Light® Eagle. Partners from the IoT companies to the hard hat manufacturers would advise on key design considerations. NLT had to work on the PCB design with the IoT companies to ensure that both boards fit into the two enclosures. Testing procedures were developed by NLT to ensure each tag operated effectively. NLT designed and advised on the two hard hat mounts with feedback from the manufacturer. This feedback would be crucial to designing an ergonomic solution.

After the Eagle was delivered, the mine’s personnel began to provide further feedback as to how the lamp could be improved. Those improvements were incorporated into the Northern Light® Eagle ILS that NLT offers today.

NLT is known for our award-winning cap lamp technology, including the world’s most popular “all-in-one” Polaris. Today, NLT is the top global innovator in cap lamps, partnering with industry leaders to incorporate their tracking and proximity technology into our lamps.

Stay Up To Date